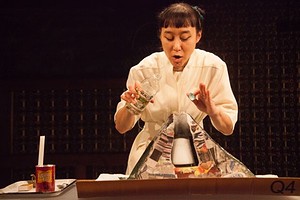 SCIENCE FAIR is an opera singer’s love-song to science. Conceived and performed by mezzo-soprano Hai-Ting Chinn, Science Fair uses physical demonstrations and experiments, a libretto created from the words of scientists, and original music to illuminate our current understanding of the natural world. Celebrating curiosities like the formation of our solar system, the structure of the atom, and the ancient legacy of DNA, Science Fairpairs light-hearted humor with luscious operatic vocals to uplift the ordinary into the realm of wonder.

SCIENCE FAIR is also the culmination of a multi-year residency at HERE Arts Center in New York City. This fully-staged, theatrical presentation presents lyrics by well-known scientists and writers, including an astronomer, a chemist, a particle physicist, a Pulitzer Prize-winning science writer, and a middle school science teacher. The performance includes live demonstrations of basic scientific concepts that shape our understanding of the world, familiar classroom experiments elucidated and illuminated, slideshows with illustrations by comic artist Maki Naro, and even a wearable model of the solar system.

American mezzo-soprano Hai-Ting Chinn performs in a wide range of styles and venues, from Purcell to Pierrot Lunaire, Cherubino to The King & I, J.S. Bach to P.D.Q. Bach. She has performed with New York City Opera, The Wooster Group, Philip Glass/Robert Wilson, OperaOmnia, American Symphony Orchestra; on the stages of Carnegie Hall, the Mann Center in Philadelphia, and London’s West End; and at Festivals including the Edinburgh, Verbier, Grimeborn, Tête-à-Tête, and Festival d’Autumne. As an Artist in Residence at HERE arts center, Hai-Ting created and performed Science Fair: An Opera With Experiments, a staged solo show of science set to music.

Hai-Ting was featured in the revival and tour of Phillip Glass’s Einstein on the Beach, performed at venues around the world from 2011–2014, and sang the role of Belle in Glass’s La Belle et la Bête, also on tour. Operatic roles include Didone in The Wooster Group’s wildly experimental production of La Didone, Poppea in Monteverdi’s L’Incoronazione di Poppea and Medea in Cavalli’s Giasone with Opera Omnia, as well as Nicklausse and the Muse in Offenbach’s Les Contes D’Hoffman, Hansel in Hansel and Gretel, Dorabella in Cosi fan tutte, and in Peter Maxwell Davies’s unaccompanied monodrama, The Medium. An ardent advocate of new vocal repertoire, she has premiered new works by Conrad Cummings, Yoav Gal, Renée Favand-See, Amy Beth Kirsten, Tarik O’Regan, Ellen Reid, Matthew Schickele, Stefan Weisman, and Du Yun, and she was featured in the 2017 Resonant Bodies Festival, a singer-centered celebration of new music in New York.

Of mixed Chinese and Jewish ancestry, Hai-Ting is a native of Northern California and currently resides in New York City. She holds degrees from the Eastman and Yale Schools of Music.